My 3D printer has become an addiction. I bought it to try to spark the kids’ imaginations, but instead it set my imagination on fire. If you listen to the podcast regularly, you know that I’m obsessed with Warframe and probably put upwards of 20 hours per week into that game.  For the past two years, I’ve gone to TennoCon, which is the annual Warframe conference that’s put on for the fans by the developers, Digital Extremes. Last year, I printed, painted, and assembled two pistols from the game called Lex Prime, which you can download here. I also created my own custom wall mount and belt holster specifically for them, available here.

They were a huge hit with my fellow fans, the folks at Digital Extreme, and some of the game’s cast. When I got back home and posted the photos (with the DE crew tagged as needed), I was asked in no uncertain terms what I was doing for this year. I replied that I was considering making either the Ignis Wraith (Warframe‘s flame thrower) or the Vaykor Hek (a massive quad-barrel shotgun). Warframe‘s Community Manager Megan Everett was slightly favoring the Vaykor Hek. Unlike what I did with the Lex Prime, I’m making this from scratch. I had never done anything like this before, so it seriously pushed me out of my comfort zone; but I was determined to do this.

I’ve been working on this since July, but last month I posted some prototype photos which, of course, went viral within the Warframe community on both Twitter and Reddit. (The author of the Reddit post admits that he got my name wrong, but I’ve been called worse.) Those photos as well as some others that didn’t get posted are shown below.

Megan, who I jokingly say is responsible for this, showed her approval not just once but twice. I’d use this as a marriage proposal, but my wife would beat me to a pulp, kill me, and then she’d get really mad.

Made entirely of PVC pipe and 3D printed material, this lovely beast is almost 36 inches (91cm) long and weighs almost 6 pounds (2.7 kg). I designed all of the 3D printed parts in Tinkercad. I’m going to have to break the illusion a little bit by adding a traditional rifle shoulder strap, but carrying this around for 9 hours would otherwise be a very painful experience.

The actual model, which is currently being painted and assembled, does have some changes, the most significant being a much larger hook for the shoulder stock. I’ve also gotten more confident in my joint filling and painting abilities, so the colors of the actual model will be more consistent and the joints will be harder to find. I will never be able to learn how to do battle damage in the two months to TennoCon 2019, so this will look squeaky clean and brand new for now. My excuse will be that it was recently taken right off the assembly line during a raid on a Grineer weapons factory and hasn’t had a chance to see battle.

I’m also printing off another Lex Prime to bring up with me and, as suggested by he who made the Lex Prime files available, I am also looking to make a melee weapon between now and July. (Wish me luck on that.) I’ll make sure to post photos of the final product when it’s done!

Until then, enjoy photos of the prototype. 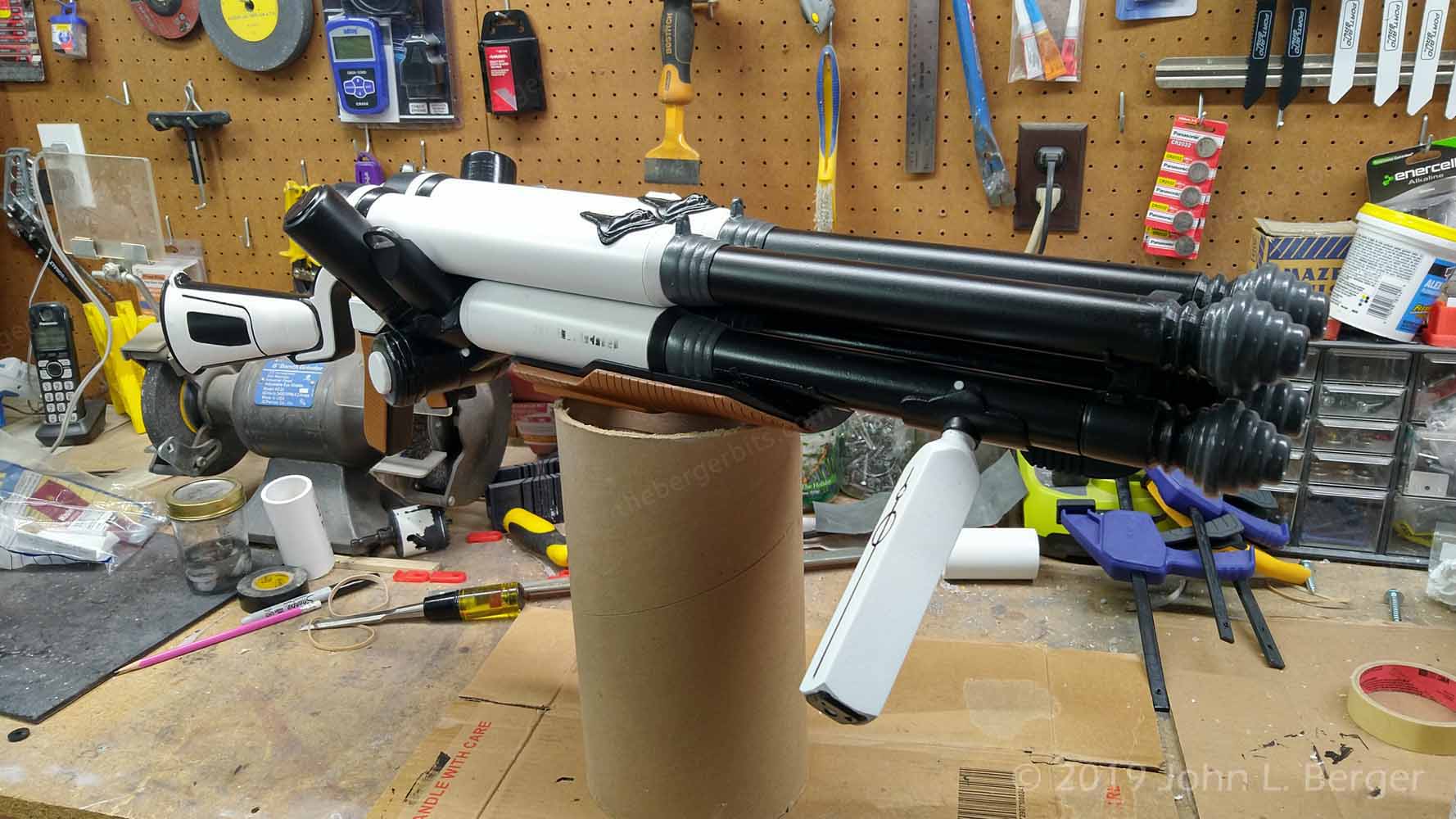