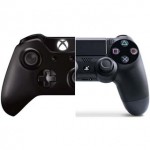 Here I sit with a new, launch-day PlayStation 4. I have had none of the problems that a few people have supposedly been having. The blue light of death and the red line of death have thus far been absent. Standing proudly next to my PS2-emulation PS3 (with a recently-upgraded 500 GB hard drive), the PS4 is shorter and thinner than its older brother, courtesy of an open-box PS4 vertical stand that I also purchased.

(How a plastic stand can be at an open-box discount when it just came out a few days before is a bit confusing. The PS3 doesn’t need a stand, so I doubt that it was a mistaken purchase; but I digress…)

Sadly, my PS4 is standing there asking me to play with it, like a new puppy looking up with its tail wagging and a ball in front of it, begging you to throw it. I really like Contrast; Resogun is the original Williams’ Defender upgraded for modern consoles with lots of particle eye-candy. But having already played through Assassins Creed 4: Black Flag on my 360, I have no need for the PS4 version. Racing games aren’t my thing, and I don’t like playing first-person shooters on a console. Sadly, the delay of Watch_Dogs until next year has left me waiting for some worthy games to arrive.

Of course, the question “Why did you bother buying it?” comes to mind. A fair question, to be sure, but there is no reason to not have purchased it at this time. The console is new, so no price drops will happen for at least 18 months. The PS4 is the cheaper of the two current-gen releases, so any price drop will likely come first from the Xbox One. As such, waiting to purchase a PS4 would have provided no financial benefit.

The next question would of course be “Why not just wait and buy and Xbox One?” Privacy and DRM issues aside, paying $100 more for Kinect when I won’t use it makes little sense; and many of the games that I’d want to play and are console-exclusive to Xbox One will be coming out for PC.

On a more emotional level, I still have not forgiven them for the DRM that they wanted (and still want) to implement; or for the arrogance that they showed when they were told that geographically the majority of the world (and even the continental US) does not have access to quality broadband; or for how they continue to treat the public not as customers but as potential pirates by refusing to allow us to upgrade or replace the hard drive with off-the-shelf parts.  (And, no, I don’t consider a much-slower USB drive to be an adequate replacement.)

Finally, it’s blatantly obvious to everyone not wearing rose-colored glasses that Microsoft doesn’t want the Xbox One to be a gaming console. They want it to be a home entertainment center that also happens to play games. That’s great – for those who want all of those features. I, however, want my game consoles to be game consoles. I’m kind of particular that way. I prefer to have unique devices that are excellent for what they do. I don’t care for devices that attempt to be a jack-of-all-trades, which is exactly what Microsoft is trying to be, nor do I want to have to pay 25% more than the competition for hardware that I have no intention of using.

And when it comes to gaming, as much as I do like the Gears of War series, the majority of exclusives that I enjoy are on PlayStation: Ratchet and Clank, Uncharted, and inFamous.

“But none of those games are out for the PS4!” you exclaim. And you would be correct, although inFamous: Second Son is scheduled for release next year.

So there it sits, like a puppy that wants to play with its new owner but without a toy for the owner to throw. I’ll still play with it because Contrast and Resogun are worthy of my time, and who knows what PS4 games will be available through PlayStation Plus in the coming months.

I am not getting rid of my PS3, so to purchase the PS4 might seem to be folly. Perhaps it is. But the funds were available, the price will not drop at any time in the near future, and the games are at least on their way. Waiting would have had no benefit; meanwhile, owning one now has been no detriment.

But at least I didn’t scalp my PS4 on eBay. I do have principles, after all.