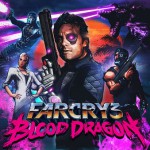 I hold the 1980s with a great deal of fondness.  All of my teen years were in the 1980s.  TV gave us Knight Rider, The A-Team, and Airwolf; movies gave us Terminator, Escape from New York, Predator, and the only good Transformers movie; VHS tapes and cable TV were exploding in popularity, and MTV actually played music.  It was a fantastic decade in many ways and I absolutely miss those years.

But if there is one thing that the 1980s is best known for with regards to movies and TV, it’s that so many of those shows and movies were metaphorically dripping with cheese. Horribly written dialog, post-apocalyptic futures, synthesized music, jingoistic and testosterone-laden rock music as the antagonist gets himself mentally and physically prepared for his final assault on the bad guys, and cybernetic implants were needed in every just about every sci-fi movie. These factors helped, for better or worse, to define the 1980s.

So, what would you get if a modern-day, open-world, first-person shooter was created back in the 1980s and had a storyline that was written to the same standards as 1980s sci-fi movies?  You’d get Far Cry 3: Blood Dragon – and the game is awesome because of how awful it is.

Far Cry 3: Blood Dragon is a first-person shooter from Ubisoft Montreal that was made specifically to capture the essence of the 1980s.  This is readily apparent as soon as you start the game and watch as the Ubisoft logo is played as though you were watching it on a worn-out VHS tape, complete with tracking distortion.

Set in a post-apocalyptic 2007, you play (what else?) cybernetic super-soldier, Sgt. Rex Colt.  Rex is voiced by Michael Biehn who is probably best known for his roles 1980s classics The Terminator, Aliens, and The Abyss. Rex and his super-soldier partner Spider travel to an unnamed island to investigate Colonel Sloan, their once-commanding officer but more importantly an elite agent who has gone rogue. In typical 1980s fashion, Sloan reveals his plans to destroy the world as we know it, kills Spider, and knocks out Rex.

Of course, Rex survives and is awakened by Sloan’s assistant, Doctor Darling (can you feel the 1980s?), who helps him to defeat Sloan and his attempt to reduce the remaining people of the world to a prehistoric state by disbursing the blood of creatures known as “blood dragons” that inhabit the island.  The only things standing between you and destiny are a bunch of cybernetic soldiers, mutated animals, and other such enemies — oh, and the blood dragons themselves which can kill you with powerful blasts from their eyes — yes,  fire blasts from their eyes!

I don’t want to give too much of the story away; but I can promise you that it will have you laughing out loud and rolling your eyes as the 1980s come back to slap you in the face. Lucien Soulban, the game’s writer, perfectly nailed the 1980s sci-fi genre. The game is loaded with often-funny one-liners and goofy humor scattered not only through items that you find scattered the island but  also (especially) during the cutscenes as well as character interactions and intentionally awful dialog that absolutely drip with 1980s cheese.

To add onto the retro feel, the cutscenes are presented in 16-bit graphics to perfectly match the quality of arcade games in the late 1980s.

The gameplay is that of an open-world, first-person shooter.  You can go anywhere you want on the island with few restrictions, drive different vehicles, kill the various creatures (some of which will attack and kill you very quickly), and liberate several occupied garrisons that are scattered throughout the island. Once liberated, these garrisons serve as fast-travel locations to allow you to hop all over the map without needing to run or drive.  That said, however, the speed with which your character runs can get you from one side of the island to the other in a matter of a few minutes.

Your weapons include the “silent but deadly” bow, pistol, shotgun, grenades, and so forth all the way up to the KillStar, a three-pronged device that looks somewhat like the Glaive from Krull and uses the bearer’s health to fire laser beams at the enemies. You can only carry four weapons at a time, and although the is only one of any type of weapon available you can unlock modifications to those weapons as you progress through the game and perform various side quests.

The game itself is rendered with the Crytek Dunia Engine and looks gorgeous. Trees and grass sway in the wind and bushes can hide you from enemies even though you can peek through to watch them covertly. If you throw an incendiary grenade, you need to back off away from the fire as it will spread to surrounding grassy areas. The game is not intended to be visually stunning, but it provides a very smooth framerate and well-rendered terrain.  Even during high-action scenes, I didn’t detect any drop in framerate.

The game itself has seven primary missions, but there are a number of secondary missions that you can get as you liberate each of the garrisons on the island.  These secondary missions involve rescuing scientists that have been captured and hunting the dangerous animals that roam the island.  Although these are not required, I would recommend getting these done as soon as possible because each one provides augmentation to your weapons. Augmentations include bigger magazines, stability improvements, better scopes, and so forth. These can greatly help with some of the later missions.

One of the collectable side quests has you collecting notes from a Doctor Carlysle, which not only provide chuckle-worthy humor on their own but also give your character the opportunity to poke fun at other games, especially Ubisoft’s own Assassin’s Creed series, for having so many collectible items.  Also scattered about are chests that can give you much needed money to purchase your upgrades and TVs that are piled up that when collected are supposed to reveal a hidden message somewhere.

Fortunately, the game does have on-demand saving; however, you cannot save if you’re in the middle of a mission.  If you decide to play the stealthy route and take out the enemies as quietly as possible, like I do, make sure that you have at least an hour for each mission.  The run-and-gun types will likely be able to finish each mission in 15 to 20 minutes.

The thing to keep in mind with this game is that it’s meant to be a pastiche (as opposed to a parody) of the 1980s. The reverence to 1980s is very present.  Not only is the dialog written in a hilariously and intentionally awful way, it also has direct references to the genre.  One moment that had me laughing out loud is a very appropriate, direct quote from Transformers: The Movie that only a true lover of the movie and its soundtrack would understand.

A younger gamer who plays Blood Dragon will probably get a chuckle out of the more direct humor but will likely cringe at the dialogue during the cutscenes. I’m sure that most of the references and the way that the game plays on the genre will be lost.  But as someone who grew up during the 1980s, I ended up rolling my eyes and laughing at my keyboard because of the occasional references to 1980s movies and how well the dialogue perfectly replicated the cheesiness of the genre.

Blood Dragon is a love letter to the 1980s. To emphasize this, one only needs to watch the release trailer which perfectly mimics the advertising and cartoons of the 1980s.

Fortunately, Blood Dragon is its own standalone game and does not require you to own Far Cry 3. The PC/Steam version requires Ubisoft’s Uplay client, which did not seem to be invasive as it was only needed when the game was running; but there are gamers who don’t like the extra level of connectivity that’s needed with Uplay or Games for Windows Live. I didn’t encounter any problems with the client; however, the web site appears to be broken because it would accept my password change request but wouldn’t let me log on. The client, however, accepted the new password without a problem.

A single run-through can last from 5 to 15 hours, depending on whether or not you decide to complete every task that’s available, including the in-game achievements, and how much you decide to roam around the island. (I’ve seen some posts from people stating that they’ve been playing it for over 30 hours, which I’m assuming is from playing it again on a higher difficulty level.)

Considering the relatively low price of $14.99 on PC, PlayStation 3, and Xbox 360, this game should be played by anyone who enjoys first-person shooters, especially those who can’t dedicate a lot of time to a game.  More than that, it’s a fun romp that’s worth the time and money for old-time gamers like me who grew up watching 1980s sci-fi or for those who have an appreciation for the genre.