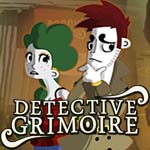 I’m a sucker for detective games as long as they’re not insanely hard. Some games love to stop you in your tracks if you don’t find the most obscure clue. Usually, such games require you to find clues by clicking all over the place hoping that you accidentally click on whatever it expects you to find. But games like L.A. Noire, one of my favorites, prefer to guide you towards the clues that you need.

Detective Grimoire: Secret of the Swamp, now available on Steam after a successful 2012 Kickstarter campaign, goes even one step further and basically pushes you towards all of the pieces that you need to solve the mystery. That results in a game where you can’t lose, but Grimoire has enough humor and style to make up for the hand-holding and the somewhat short length.

Grimoire starts off feeling like a traditional point-and-click adventure game, which is expected considering that this iteration was initially a mobile game; but the gameplay consists of finding clues throughout the swamp island, questioning the people on the island about those clues, and solving the mystery behind the murder of Richard Remington, the owner of the tourist trap that’s located in the swamp. (Yes, there is a swamp with a tourist trap that’s based on an imaginary monster. That should be indicative of the silly sense of humor that permeates Grimoire.)

In many ways this game is distilled to nothing more than “keep clicking things and show clues to everyone”. Eventually, you’ll have all of the clues; you’ll have all of the findings for each of the characters that you meet; and you’ll be able to pretty easily figure out who’s responsible and why. This isn’t a game for master sleuths at all. And considering that it can be completed in less than three hours, I can forgive people for dismissing Grimoire as a potentially lackluster experience; however, the various pieces of the game come together in such a way that you’ll likely come away with a smile on your face.

The voice acting is very well done. Each of the voice actors hit the expected persona of each character very well, ranging from the bored girl at the souvenir cart to the egotistical film director to the stereotypical nerd in the swamp’s museum. At no point in the game did I feel that the voice acting was sub-par.

The game’s humor is very dry but still amusing. Although there were no laugh-out-loud moments, I ended up chuckling quite a few times at the silliness of the characters, their various reactions to the events and clues surrounding the murder, as well as the overt lunacy of the setting and environments.

I absolutely love Grimoire’s hand-painted art style, which is reminiscent of many graphic adventure predecessors with a heavy touch of cutout animations from the 1950s and 1960s. The style is cartoony yet not so cartoony that it feels like it’s a kids’ game. For what the game is trying to be, the art style feels just right.

Any problems that I have with it, though, are related to its simplicity. It’s a very easy game. If you get a certain puzzle wrong, you can keep doing it over and over again until you get it right with no apparent consequences. Additionally, the main culprit is pretty easy to identify even from the first interview. There is no real challenge nor are there any repercussions to being wrong. You just keep going until you finally get the right solution.

Where you might need some additional consideration, however, is determining which version to buy. The Steam and direct-download PC versions are almost twice the price of either the iOS or Android versions, coming in at a comparably hefty $6.99 as opposed to $3.99 for the Android or iOS version. Granted, $6.99 is a small price to pay for two or three hours of entertainment (have you been to a movie theater lately?) and for supporting indie game developers; but the price discrepancy makes it difficult to justify the Steam/PC version if you have an Android tablet or an iPad. The PC version would probably work wonderfully if you have a Windows laptop with a touchscreen, though, and the Steam version has achievements if you’re into those.

Nonetheless, Grimoire can provide a few enjoyable hours. Even though it’s not particularly challenging, the rock-solid voice acting, dry humor, and wonderful art direction help to make the experience much more positive than negative. If you have a few hours of gaming time available, you could do a lot worse than Detective Grimoire.

This product was provided for free by SFB Games, courtesy of Indie Gamer Chick; however, this did not have any effect on the honesty and integrity of this review.